BERGAMO, ITALY - OCTOBER 03: Players of AC Milan celebrate the win at the end of the Serie A match between Atalanta BC v AC Milan at Gewiss Stadium on October 03, 2021 in Bergamo, Italy. (Photo by Claudio Villa/AC Milan via Getty Images)

Matchday 7 is over in Serie A and AC Milan were able to grab 3 very important points away from home against Atalanta.

It was a well-deserved and well-fought victory. Pioli and his group brought the 3 points home.

The game started well for Milan who scored 30 seconds in already thanks to Davide Calabria who confirmed himself once again.

After the first goal, Atalanta started to press high up the pitch and tried to put much pressure on Milan’s midfielders and full-backs in order to close passing options. Gasperini’s side came close to scoring a few times but Mike Maignan displayed super saves and managed to keep his team on top.

In minute 43, Sandro Tonali, thanks to a huge effort manages to discard the ball from Atalanta’s defender and sprints towards the goal. He got on a one on one situation with Musso, the Nerazzurri’s goalkeeper but with much composure, he managed to put the ball past the net.

In the second half-time, AC Milan faced much pressure from Atalanta again. But, it seemed that Kessié and Tonali had more control and dominance the centre-backs, Tomori and Kjaer were also in top form as usual. Milan relied on the counter attacks and created some important chances. Later, in minute 78, Theo Hernandez led a counterattack with supersonic speed and gave a pass to Rafael Leao whose efforts tonight were crowned with a beautiful goal.

Milan seemed in control for the remainder of the game. However, fast forward till minute 86, Atalanta are awarded a penalty after a handball on Messias. Duvan Zapata converts from the spot with a powerful shot. Then,  former Milan midfielder Pasalic was able to score past Maignan after an assis from Duvan Zapata in a controversial situation where it could have been a foul in minute 93.

The game ended there after 94 minutes of much physicality. 5 goals, AC Milan return home with three important points. Now, it is time to recover and a little bit of rest for the red and black faithful. Time for the international break, some players will join their national teams while others remain to work at Milanello. Stefano Pioli will hope to recover all the injured players during this break.

Below you find our match rating graphics. Let us know your thoughts in the comments. 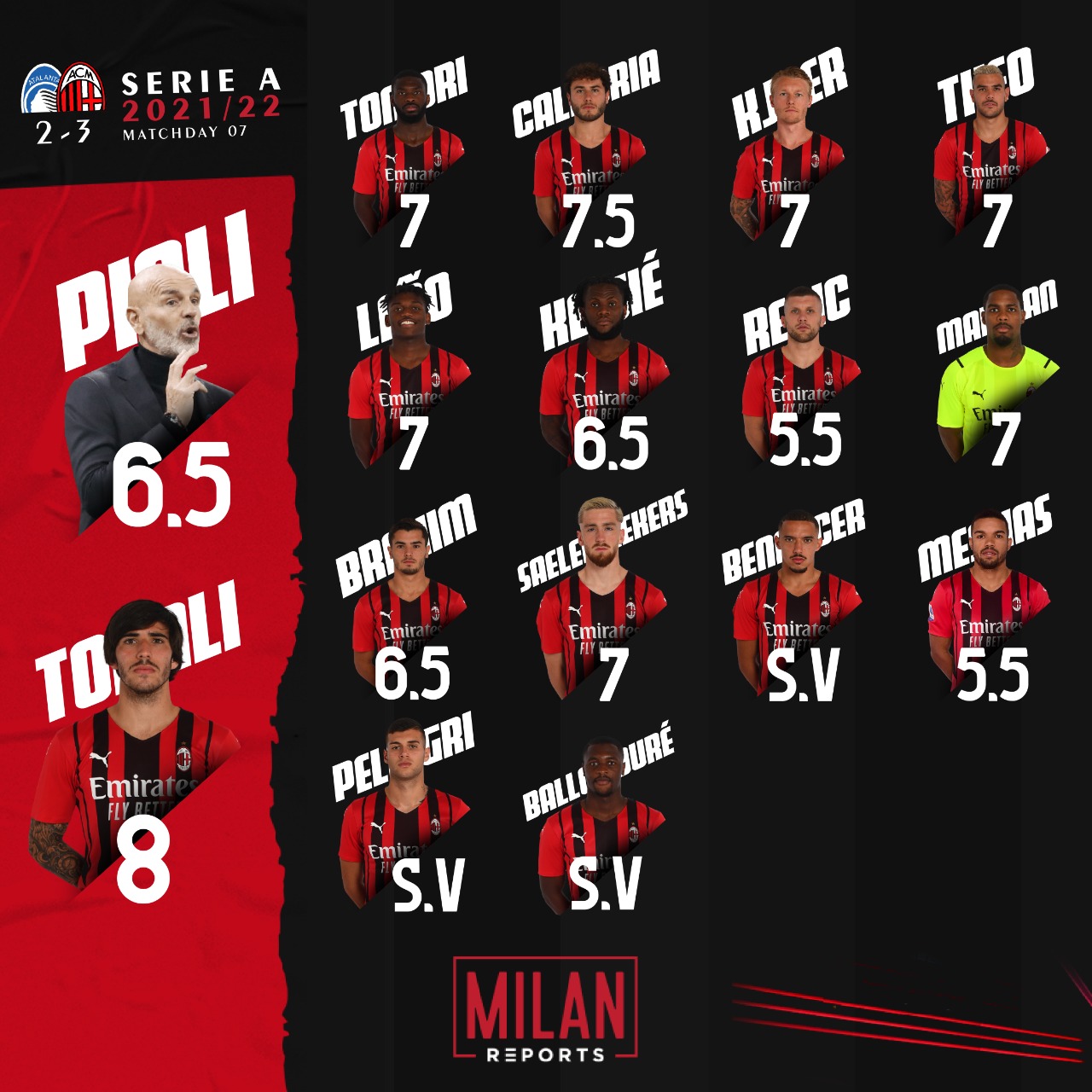 Pioli: "We must not be satisfied... I have grown thanks to the players and management"