From 18 January Milan Reports is also on twitch.
With Martino Puccio and Matt Santangelo, we are live every Tuesday at 7.30 pm, and in all post matches. Martino and Matt were honored by the Football Content Awards, with their podcast “State of Play”. 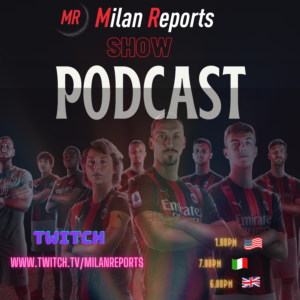 OUR PROGRAMMING – On Tuesday Martino and Matt conduct “Milan Reports show”, a show lasting about 1 hour with many guests from all over the world. With Martino and Matt sometimes there is also the director Vito Angelé and the editorial staff of Milan Reports. During the show the protagonists could be you too! You can interact with us with on twitch chat (SUBSCRIVE TO OUR CHANNEL TO NOT MISS OUR SHOW, IT’S FREE).
There is also talk of transfer market with Vito Angelé in our shows. News and rumours from Italy!

THE NEXT SHOW (THE PREVIEW),  BOLOGNA – MILAN POST MATCH PODACAST

We are waiting for you after the match between Bologna and Milan to comment on the match. You will be able to interact with Martino and Matt with our live chat!

Instead in Tuesday’s episode Martino and Matt will talk about the last match against Bologna. We will also comment on the end of the transfer market and the director Vito Angelé will announce the winner of our lottery! A fantastic prize awaits you. If you don’t have your ticket soon, do it now! Here are the instructions. Good luck!

You have the chance to win any AC Milan shirt of your choice with a maximum value of €100 👉🏼 https://t.co/ZFXR5YiR4X

A winner will be announced soon. Good luck.🤞🔴⚫ pic.twitter.com/gVTjI4cheV

Sky: Samu Castillejo attracts interest from Spanish club and Milan already has a replacement in mind

Sky: Samu Castillejo attracts interest from Spanish club and Milan already has a replacement in mind