Following a disappointing fourth place finish in the league in 1995, AC Milan were keen to restore their domestic dominance and did just that in the next season.

So, let us set the scene; The Rossoneri saw rivals Juventus take the crown away from them and finished 13 points behind the Bianconerri. The Red & Black half of Milan had won three straight Scudetti, to go along with a host of other trophies, both at home and abroad.

President Silvio Berlusconi and transfer guru Adriano Galliani were not about to just let the club flounder and promptly invested in the transfer market…and what a mercato the club had in the summer. 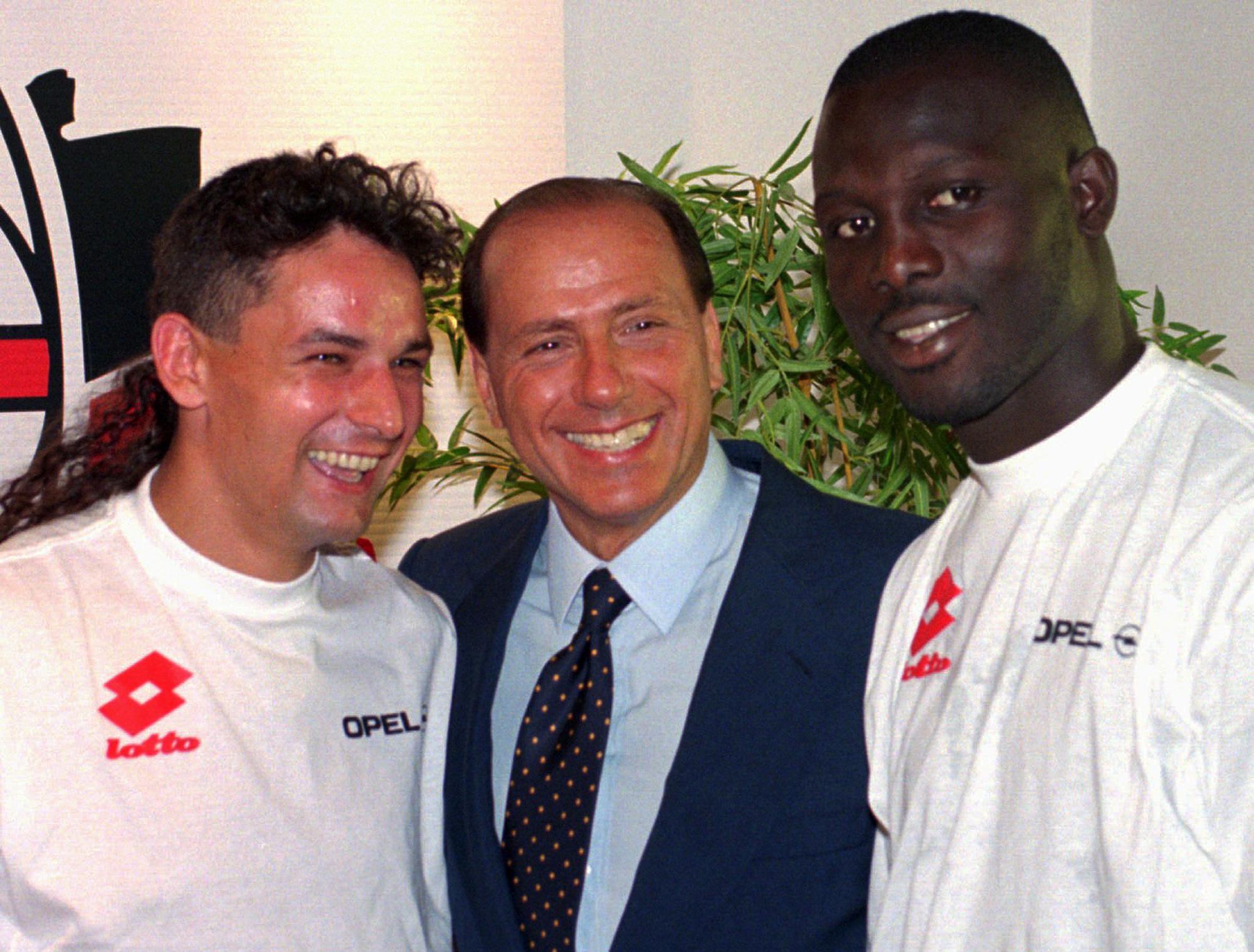 Players were needed especially in attack.

Two 28-year old forwards by the name of Roberto Baggio and George Weah were signed. For any club to sign even one of these superstars in a single transfer window would be remarkable, but that il Diavolo acquired both in the summer of 1995, made everyone else stand up and take notice, yet again.

Baggio joined from Juve after some intense negotiations, as although the club’s hierarchy made it clear “il Divin Cordino” were no longer in their plans, allowing him to join a rival was never going to be an easy sell.

Liberian Weah was signed from PSG, after three highly successful seasons, where he scored goals galore and was the top scorer in that year’s Champions League. The dynamic duo cost a combined fee of just over 16M Euros, an astronomical figure for the times.

In addition to the legendary defensive line of Sebastiano Rossi-Paolo Maldini-Alessandro Costacurta-Franco Baresi-Mauro Tassoti along with Christian Panucci, the defense was still solid. In midfield the combination and chemistry between Demetrio Albertini and Marcel Desailly was in it’s prime. Plus stalwarts Roberto Donadoni, Zvonimir Boban, Dejan “il Genio” Savicevic and striker Marco Simone, coach Fabio Capello had a well-rounded team.

The team gelled from the very start of the campaign.

They reeled off four wins in their opening four matches, including a comeback victory at the Stadio Olympico versus Roma by 2-1, with Weah grabbing a sumptuous double strike. They suffered a surprise defeat against Bari the following week, which was not the ideal preparation for the visit of arch-rivals Juve.

A raucous and rowdy Rossoneri crowd filled La Scala del Calcio for one of the most always anticipated clashes in the Serie A calendar. It was the Weah and Simone show! The latter belted a free-kick past Angelo Peruzzi from a training ground set-up and seven minutes later set-up the former for his now customary goal.

14 minutes gone and the home side were up 2-0 and the fans were in delirium. Alessandro Del Piero pulled one back for the visitors with 10 minutes to go, but that was as close as they’d come that day.

What was interesting about that particular campaign quarter of a century ago, was how Capello rotated his team. Both player personnel and formation was subject to change as the San Canzian d’Isonzo born former midfielder saw fit.

He maintained the same defensive shape with the four at the back, however in the middle and up front, he kept the opponents guessing.

Sometimes he used three midfielders, with Albertini and Desailly the main protagonists and switched around Stefano Eranio, Gianluigi Lentini, Boban  etc…In attack, he sometimes used two out and out strikers such as Simone and Weah, while adding the likes to Savicevic, Donadoni and Baggio to support.

The benefit of that in handsight might just be that he kept all his players on their toes, knowing that they needed to take the opportunity when they did get that start. Added to the fact that there was the three-player foreigner rule in what everyone would find out later that year, was in it’s last season.

It might seem that Milan were cruising to the crown in Calcio, but back then Serie A was by some distance the best, but most significantly, highly competitive league in the world. It was the time of “La Sette Sorelle” or the “Seven Sisters” of Italian football when all of them competed for honours, both in Italy and in Europe. The Rossoneri experienced a bit of a mid-season slump.

In their next 11 matches, they only managed to emerge with all three points on four occasions. However, and this was a true testament to the strength of the squad, they did not lose any of the other seven and showed, that the all too familiar “hard to beat Milan” was still firmly intact.

However, the notorious Italian press still had their doubts, but Capello and his charges were not deterred or indeed distracted.

As February began Milan and Juventus were in a heated and tight battle for the Scudetto. Both clubs had at that point as well advanced to the quarter-final stage of their respective European competitions.

Weah would yet again prove a decisive factor in proceedings during the month. In total the now current Prime Minister of Liberia garnered 11 goals in the league that season, but four came on the trot versus Roma, Atalanta, Bari and Juve.

Versus the Giallorossi, he combined brilliantly with Baggio to chip the goalkeeper.

Versus La Dea, he ran onto a long rather hopeful ball from Albertini, blazed past couple of the home team’s defenders to score with the outside of his right boot.

Versus Biancorossi, with the score tied up at two in the 88th minute, he ran onto a floated ball and proceeded to nod the ball over the onrushing goalkeeper. There was a collision between the two and Weah had to be taken off immediately, but he had his say.

Then, away to La Vecchia Signora, Milan were behind from a third minute Antonio Conte strike. Just to spice up the activities, captain Baresi clashed with Juve striker Fabrizio Ravanelli soon after. But, at the half-hour mark, Weah again came to the fore. A well worked move involving Boban, Albertini, Baggio and Donadoni, with the latter crossing into the box, was finished off by Weah with a bullet header.

Albertini was the recipient of a rough tackle and had to be stretchered off. Both teams sparred for the remaining 60 minutes, but at the final whistle, Milan were much more the happier side as they held the lead in the standings over Juve.

Summer signing Massimo Ambrosini replaced the injured Albertini for the next game versus Vicenza, but with no desernarible drop in quality. Rossoneri ran out 4-0 winners. Momentum was building, the team could see the finish line and there was a calmness and composure in the play.

A Derby defeat to Inter only delayed the inevitable and by the time Milan hosted Fiorentina on 28th April, they knew a win would wrap up the title.

Capello sent his team out in a 4-2-3-1 formation with Weah, Baggio, Savicevic and Donadoni all started. It was La Viola however who took the lead through Manuel Rui Costa to send a bit of anxiety around the San Siro in the 13th minute. However, the home side’s response was quick as “il Genio” Savicevic levelled matters less than a minute after.

On the stroke of half-time, Milan took the lead that they had been craving. Weah was fouled in the penalty box and Baggio calmly sent Francesco Toldo the wrong way and a sense of relief reverberated round the stadium.

However, this was not going to be a stroll in the second half, as Claudio Ranieri’s men came to play. The Tuscans were awarded a spot kick of their own, but Rossi saved from Rui Costa to loud cheers from the tifosi. But, there was still work to be done.

With 25 minutes remaining and all on the edge of their seats, Donadoni weaved his wing play as had been seen countless times to set up Simone to apply the finishing touch.

At the final whistle, there were wild scenes at the San Siro as the city’s red and black half celebrated their 15th Scudetto and their return as Serie A‘s kings was confirmed.

From France: Milan is the only club contacting 21-year-old midfielder