AC Milan came out victorious against another team that started the season well, which is SS Lazio.

The Rossoneri started the game with a clear intent to attack and score goals. This was clear with the aggressive play and high pressing done by the players, especially Sandro Tonali.

AC Milan’s defence also looked strong and never had much trouble even with Ciro Immobile, Pedro and Felipe Anderson trying to find ways to strike against Mike Maignan.

The French goalkeeper of the Rossoneri, was not seen much as the defenders and midfielders of Il Diavolo worked hard to eliminate all threats.

Davide Calabria, vice-captain in the team, again displayed quality, maturity and the fruits of his hard work and preparations. The Italian right-back was defensively rock solid and took the ball from the opposition quite a few times.

One of the main players that contributed to the win was Ante Rebic. The Croatian, despite missing some passes and dribbles in the beginning, still managed to prove crucial as he assisted Leao’s first goal in a splendid counter attack. The former Eintracht Frankfurt also assisted Zlatan Ibrahimovic’s goal in another counter attack, initially started by Sandro Tonali thanks to a beautiful pass.

The Italian midfielder number 8, continued to impress the fans and showed that he can really be relied on this season. Once again, he showed dominance, useful pressing, positioning and beautiful passes and vision.

Franck Kessié, returned from injury, and showed his usual quality and physicality in the midfield. Despite missing the penalty, the player’s weight was still remarkably seen in the middle of the pitch as he retrieved the ball and kept possession of the ball when needed before being substituted by Algerian teammate Ismael Bennacer.

Zlatan Ibrahimovic finally returned to the field after many months of absence. His last game before tonight was against Juventus in May, then he had to sit out for injury and go under the knife and recover from the injury. However, all the legendary Swede needed was a few minutes to score his first official goal of the season. It was as if he did not miss a single game. The almost 40-year-old continues to be an example of hard work and commitment to his teammates.

Coach Stefano Pioli must be very pleased about his players’ performance. It was a well-played game, with a deserved victory. The Italian tactician managed the game well and the fans could not have asked for a better outcome at the San Siro. Now, it is time to think and prepare for the first Champions League fixture against Liverpool.

Attached below is our player ratings for the game against Lazio 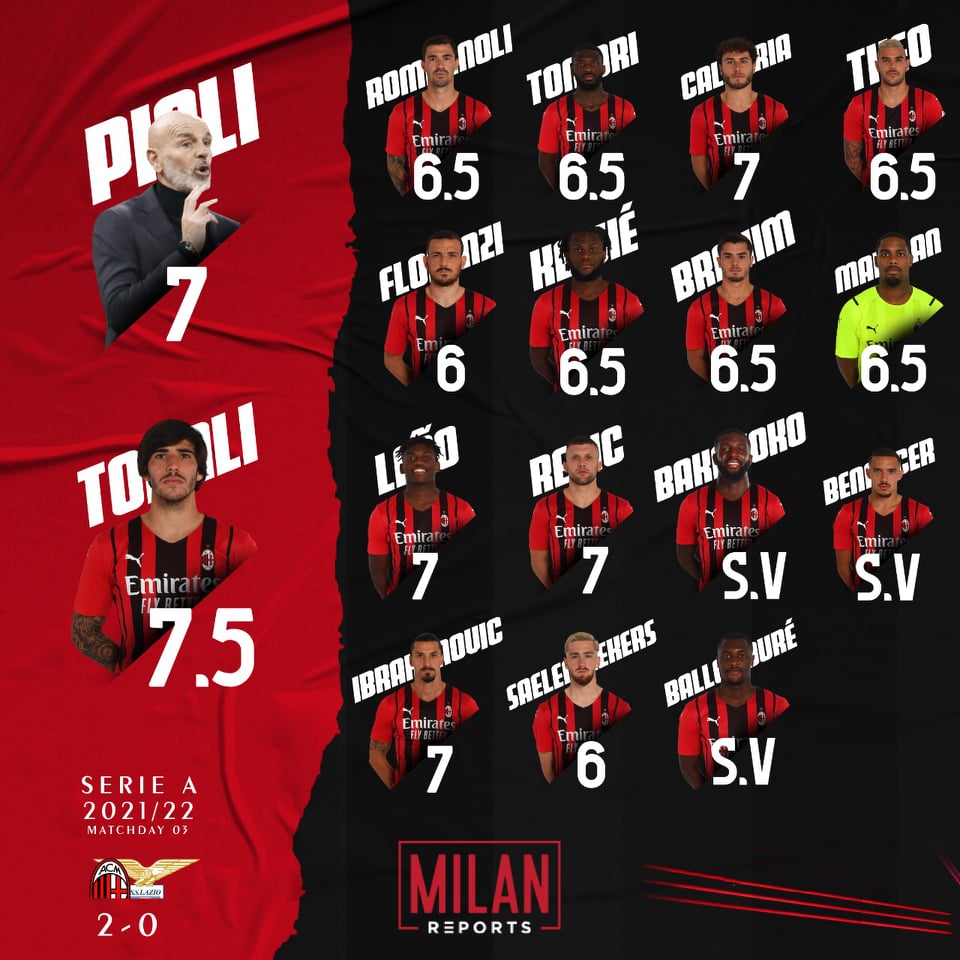