LIVERPOOL, ENGLAND - SEPTEMBER 15: Simon Kjaer of AC Milan is put under pressure by James Milner of Liverpool during the UEFA Champions League group B match between Liverpool FC and AC Milan at Anfield on September 15, 2021 in Liverpool, England. (Photo by Claudio Villa/AC Milan via Getty Images)

Tonight, at the Anfield stadium, AC Milan played its first game of Champions League football since 2014. The clash against Liverpool always promised to be a tough one and the Rossoneri could not hold on to a positive result as they lost 3-2 to Jurgen Klopp’s side.

The match started with the Reds applying their usual and famous gegenpress which suffocated the Rossoneri’s midfield as they could not play with their usual style.

Liverpool only needed less than 10 minutes to score the first goal and created important goalscoring chances as well as missing a penalty which Mike Maignan saved brilliantly.

Milan had an awakening at the end of the game and exploited the lack of attention from Liverpool’s defence as Ante Rebic and Brahim Diaz were able to punish them for it in successive goals to make it 1-2 before the end of the first half.

The second half started with the usual Liverpool’s pressing and Milan again failing to create many chances and threaten Alisson again. Jurgen Klopp’s men had a big determination and willingness to equalise which happened thanks to goal of Mohamed Salah in the 49th minute.

Liverpool were all over AC Milan and Jordan Henderson was able to secure the first three points to his team by scoring a powerful shot at minute 69.

The game was fair, Liverpool’s level was at the top, Milan could not cope with the English Premier League club’s pace for 90 minutes. However, there were some good signs shown from Stefano Pioli’s men. This defeat will serve as a lesson to learn and grow further. There is no shame in losing 3-2 to Liverpool at the Anfield, who won the Champions League in the 2018/2019 season and the English Premier League trophy in the 2019/2020 season.

Milan will hopefully get back up and learn from this. Now, head held high, the boys return to Milanello and should start preparing for a very important league match against rivals Juventus.

Attached below is our match ratings graphic for the Champions League fixture against Liverpool. 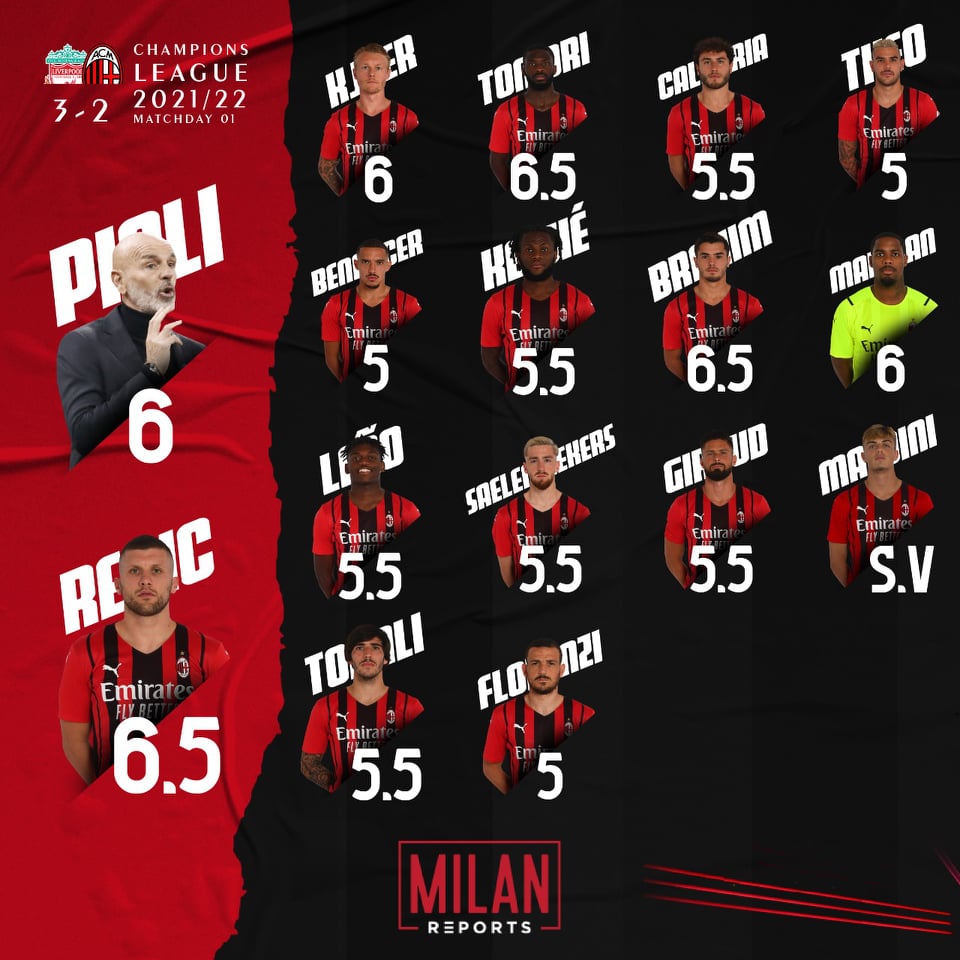